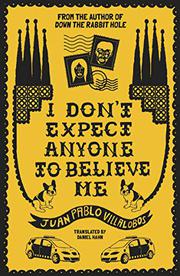 I DON'T EXPECT ANYONE TO BELIEVE ME

A grad student gets caught up in a world of gangsters.

Villalobos (I’ll Sell You a Dog, 2016, etc.) is known for experimental novels that tangle the absurd with the grotesque, the poignant with the foulmouthed. His latest novel to appear in English might be his best yet. The story follows a Mexican literature student, conveniently named Juan Pablo Villalobos, who travels to Barcelona to work on his dissertation and, by way of his cousin, gets caught up in a world of gangsters and thugs. He has to do what they tell him to do, or else. He finds himself casting his girlfriend aside, pursuing a Catalan lesbian named Laia, and, possibly worst of all, changing his dissertation topic. The narrative alternates between his point of view, his enraged girlfriend’s diary entries, and long, rambling letters from both his now-deceased cousin and his passive-aggressive, guilt-tripping mother, who refers to herself in the third person (“would it have killed you to call her on Christmas Eve?”). Villalobos’ narrative style is so propulsive it’s nearly impossible to stop reading. There’s certainly a mystery—or two or three—buried under all this, but where the red herrings end and the mysteries begin could be anyone’s guess. Along the way, Villalobos has a lot to say about racism, colorism, tensions around immigration, literary theory—oh, and the nature, uses, and limits of humor in literature. This is a hilarious novel, and it’s brilliant and it’s bittersweet, too, in surprising ways. The mixture is uneasy and also just right.

Pitch-perfect from start to finish.