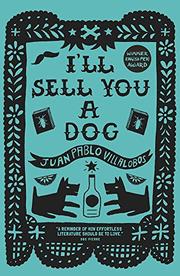 I'LL SELL YOU A DOG

A novel of retirement, regret, and revolution in Mexico City.

Teo, short for Teodoro, which may or may not be his real name, lives in an old, broken-down building where the cockroaches run rampant. Teo is approaching 80. Every day he drinks. He drinks either in the bar on the corner; with the greengrocer, Juliet, whom he calls Juliette; or in his room, with a Mormon missionary named Willem (whom he calls Villem) or with a young revolutionary named Mao, who may not be a revolutionary and may not be named Mao. Teo either keeps track of his drinks, or he loses count. “Maybe if you didn’t drink so much…” is a refrain he hears often. Teo had a long career as a taco seller in Mexico City, but before that he was an aspiring artist. Then he gave up his ambition to support his mother, who’d been abandoned by his father and began taking in stray dogs, to whom she bestowed names like Market and Eighty-Three, for the place and the year, respectively, she found them. Now Teo carries around a copy of Adorno’s Aesthetic Theory, from which he reads passages to telemarketers and anyone else who annoys him. He carries on an ever escalating battle with the “literary salon” that meets on the first floor of his building. When the salon kidnaps Teo’s Aesthetic Theory, he takes revenge on their bulky copies of In Search of Lost Time. Throughout this lark of a novel, there are many appearances by dogs, some of whom die, ignominiously, by strangling, some of whom are sold, illegally, as taco meat, and some of whom roam the streets in lonely, mangy packs. This is the third novel by Villalobos (Quesadillas, 2014, etc.), and it should help establish his reputation as a maniacally witty writer of satire and absurdity. He takes on Mexican history, literary theory, and the just-scraping-by lives of the 99 percent, all while telling a damn good story. He has a novelist’s eye for detail, a painter’s for image, and a poet’s for turn of phrase. Remember those cockroaches? They “take advantage” of the building’s elevator to ride “downstairs to visit their associates.”

A wry, sardonic romp made even more vibrant by its various satires and absurdities.