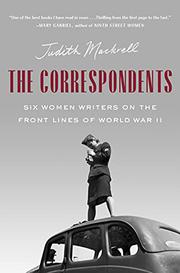 An account of six pioneering women who worked as war journalists in World War II.

Mackrell’s chosen six came from different backgrounds though they all ended up writing for British or American news outlets. Some, like Martha Gellhorn, who was married to Ernest Hemingway; or Lee Miller, a popular fashion photographer and Vogue cover model, were already public figures. The others—Virginia Cowles, Clare Hollingworth, Helen Kirkpatrick, and Sigrid Schultz—made their marks with their intrepid reporting. All had barriers to overcome, many the result of outright misogyny (they constantly battled “sexually predatory officers or over-entitled male journalists”), and none of them backed away from dangerous assignments. Mackrell gives enough background on each to show how they became journalists—for most of them, well before the war—and how their initial beats were traditionally “feminine” subjects—e.g., society columns, fashion, or the “woman’s angle” on a topic of broader interest. Nonetheless, the persistence, determination, and daring led them to cover the Spanish Civil War (Gellhorn and Cowles), Berlin during Hitler’s rise to power (Schultz), or the experiences of frontline troops in Europe or North Africa (Hollingsworth and Kirkpatrick). Schultz, writes the author, “could not yet take Hitler seriously as a politician: he seemed to her a crude ‘fascist bugbear,’ a ‘demagogue drunk on his own word.’ ” This is incredibly rich material, and Mackrell makes the most of it, showing Gellhorn stowing away on a hospital ship to cover the D-Day landings or Miller taking a bath in Hitler’s tub, an incident immortalized in a famous photograph. The author also describes the reporters’ outraged responses to the concentration camps, which several of them saw shortly after the liberation. Mackrell concludes with a brief summary of the women’s postwar careers, capping off an exhilarating read packed with emotion and genuine humanity.

A vivid portrayal of six remarkable women who made history reporting on World War II.