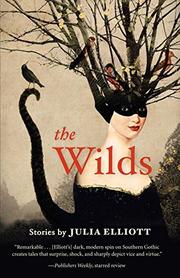 Robots may search for love, but there’s nothing wilder than human nature in this genre-bending short story collection from debut writer Elliott.

Elliott (English and Women and Gender Studies/Univ. of South Carolina) takes the definition of "wild" and runs with it in stories which leap from Southern gothic to dystopian science fiction and sometimes blend both together. A robot with silicone lips explores permutations of love; an Alzheimer’s patient regains her memory in a futuristic nursing home; and a woman goes on a Neanderthal retreat to lose weight. Sharp and funny, the stories are dark satires on the fad diets and self-absorption of modern life. Elliott shines when it comes to worldbuilding; her details are so dense and vivid the sticky heat of the deep South rises off the page, blending with the hipster neurosis of one of her Zen-crazed protagonists. She cartwheels from the sublime—“the sky in pink turmoil”—to the grotesque—“hormones spiked his blood...and fed the zits that festered on his sullen face"—but prefers to spend most of her time on the grotesque. At times it's hard to follow the lush twisting vines of Elliott’s plots because they're so entangled in the worlds she creates. But no matter: Even if the stories end abruptly, without enough of a road map to let you know where you are and why you're there, there's always a delicate image or an emotional jolt that leaves you wanting more.

This book will take you to places you never dreamed of going and aren't quite sure you want to stay, but you won't regret the journey.