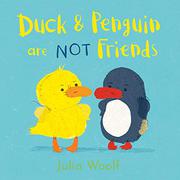 DUCK AND PENGUIN ARE NOT FRIENDS

Can these toys get along? Not if they can help it.

Duck and Penguin—the toys in question—are the beloved stuffed-animal pals of BFFs Betty and Maud, respectively. The two love playing together and are convinced their cloth companions are equally enamored of their activities—swinging, building sandcastles, baking, painting, and playing baby dolls. However, the girls are so caught up in their own enjoyment that they’re oblivious to the enmity between the plush animals. When Betty and Maud briefly leave Duck and Penguin on their own, the toys seize the chance to escape being “itty-bitty babies” and do the things they testily endured earlier—but this time, they’ve chosen to do so; unsurprisingly, they have fun. Trouble was, the toys disliked having friendship and games imposed on them. Children will likely get this unoriginal message, but there’s also a cautionary note for well-meaning caregivers who overenforce togetherness on kids. The energetic, expressive, and childlike illustrations will elicit chuckles as spreads portray how much Duck and Penguin initially oppose each other; incorporated onomatopoeic words reinforce their displeasure. The toys are depicted the worse for wear: Duck trails a thread from an unraveling seam, Penguin’s losing stuffing. The ever smiling, brown-haired girls are appealing: Betty is white and bespectacled; Maud is black and wears her hair in two afro puffs.

It’s not the freshest take on friendship, but the toys bring the point home.