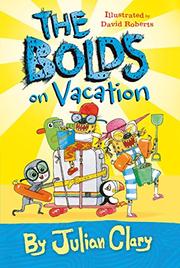 THE BOLDS ON VACATION

When the Bold family (hyenas living incognito as London suburbanites) and friends head to the seaside on holiday, with Bobby disguised as family dog “Stinky,” nothing goes as planned.

The deceit begins when an encounter with a school bully leaves Bobby with a sprained leg. Certain that a doctor would see through his disguise, his parents follow ursine neighbor Mr. McNumpty’s suggestion and take Bobby to a veterinarian instead, overcoming Bobby’s reluctance by letting him choose his name. Still healing, Stinky remains in disguise on the Cornish coast. Meanwhile, the vacation must go on: A sand castle is built, then destroyed; Uncle Tony and Miranda the marmoset prove surprisingly adept at surfing (why is revealed later). Jealous of Bobby’s freedom to express his hyena nature, his twin, Betty, teases him, but when he disappears, she’s as worried as their parents. New friends Pamela, a short-winded puffin (she used to smoke), and dolphins Galileo and his chums don’t hide their animal natures; Bertha, owner of Tiddles Tea Shop, is a cougar. Disguised or not, each assists in the hunt for Bobby. The series’ best illustrations thus far take full advantage of the maritime setting and depict human characters as racially diverse. The genially intrusive narrator throws in a little suspense and points the occasional moral. The Bolds don’t just tolerate difference, they embrace it. Mr. Bold’s ubiquitous, cheerily horrible Christmas-cracker puns should amuse young riddle aficionados along with a few limericks (the sort found in your classier crackers).