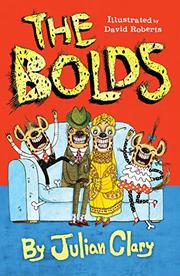 Meet the Bolds: Fred, Amelia, and their children, Bobby and Betty; as nice a suburban family of hyenas posing as humans as one could ask for, they should rehabilitate the scavenger’s tattered, post–Lion King reputation among the younger set.

They move to an English suburb, Teddington, which has a comfortable climate; moreover, here, instead of engaging in the hyena dinnertime free-for-all on the savannah, humans line up politely. These pluses aside, the long learning curve tests Fred and Amelia, requiring the utmost ingenuity and adaptability, especially after the pups are born. They’re up to the challenge. Shocked to discover water and food aren’t free, Fred lands a job writing the silly jokes inserted in Christmas crackers. Hats make good disguises, but how are the pups to hide their tails at school? Certain cherished hyena habits are hard to break (laughing raucously in class, rummaging through garbage, gnawing on chairs). Misanthropic Mr. McNumpty next door becomes suspicious, especially after the family starts visiting the safari park and learns an elderly hyena’s in mortal danger. Published first in the U.K., the book’s hilarious plot and abundant illustrations make it a top choice for reluctant readers. The art brilliantly reflects the many twists and turns of plot and emotion, among them the Bolds’ (mostly) staid suburban home life, their sinister neighbor, and other wild animals—fox, hippo, gazelle—possibly living the human life incognito.