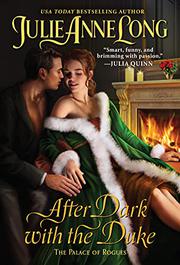 AFTER DARK WITH THE DUKE

From the Palace of Rogues series, volume 4

Desire and disdain collide as an opera singer who's been publicly shamed clashes with a priggish, aristocratic military hero.

Soprano Mariana Wylde seeks refuge at the London docklands boardinghouse known as the Palace of Rogues after a duel between a former lover and a current fan makes her a tabloid scandal. To her dismay, Gen. James Duncan Blackmore, the Duke of Valkirk—who's lodging there temporarily while writing his memoirs—takes an immediate dislike to her for her perceived debauchery. Initial skirmishes between the two culminate in a mean-spirited action on his part, precipitating an apology and a period of forced proximity between them. While the duke, who speaks Italian, gives private lessons to the soprano, who only sings it, they begin to slowly share their fears and traumas, and the two bruised souls drop their bellicose facades and begin a secret affair. Despite their electric attraction, however, her disrepute presents an insurmountable barrier to a legitimate relationship in his eyes, yoked as he is to his own reputation as a moralist. Long specializes in crafting tension between people whose sexual and intellectual compatibility are at odds with their place in social hierarchies and prescribed gender roles. But even as British society seems unlikely to accept this union, the plucky proprietresses of the Palace of Rogues and the other charming lodgers there model alternatives to a conventional life. It's up to the duke to overcome his black-and-white perspective as he comes to see how sexist stereotypes demonize nonconforming women while excusing men. If the novel’s agenda is obvious—questioning the patriarchal hypocrisy that condemns women after taking away their choices—the execution is subtle and moving. Scenes where the protagonists’ spoken words compete with their body language mirror the strain between socially dictated mores and individual desire. The only sour note is the hero’s background, which falls into a long romance tradition of British imperialists—one that needs to be retired, or at least interrogated.

An enemies-to-lovers romance that deserves to be savored.