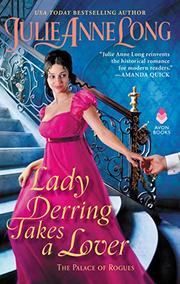 From the Palace of Rogues series, volume 1

When a widowed, penniless aristocrat opens a boardinghouse, she hopes to make her own way in the world and create a sense of family for her disparate tenants, including an enigmatic Navy captain who makes her heart skip.

Delilah Swanpoole, Countess of Derring, hadn’t loved her husband, though she’d tried to be a good wife. However, when she discovers he was “in debt up to his eyeballs” at his death, she decides to be bold. The one valuable thing her husband left her is a building by the docks, and when she goes to inspect it, she runs into the earl’s mistress, Angelique Breedlove, whom he has also left penniless though he'd promised her a pension. Delilah realizes the abandoned building could be the savior of both of them, and she convinces Angelique, whom she quite likes, to go into business with her as proprietresses of London’s newest boardinghouse, The Grand Palace on the Thames. Boarders are slow in coming and very eclectic, but for Delilah, the most compelling guest is Tristan Hardy. He's a captain with "an air of implacable, insufferable authority. As though he moved through the world with ease in part because he knew destiny wouldn’t dare countermand his orders.” According to Tristan, he's looking for rooms while the ship he’s purchasing is prepared for long merchant runs—which is true, but he’s also the Navy’s blockade commander, and his main reason for being in the area is to track down some illegal cigars. As the investigation expands, his attraction to Delilah and his affection for the household grows, becoming increasingly complicated when the cigars seem to have connections to The Palace. In the first book of the Palace of Rogues series, author Long returns triumphantly to historical romance with this beautifully written and achingly romantic story of two characters who are blindsided by each other and must fight for their love when it’s tested. A large cast of entertaining characters keeps the plot moving while breathtaking writing elevates the story on every page.