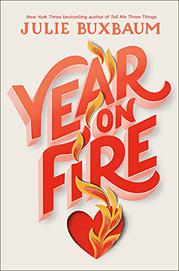 The Gibson twins and their best friend, Paige Cohen-Chen, are a trio: the inseparable, loyal Imogen and Archer balancing out Paige’s alpha-girl attitude. They’ve fit together as a perfect unit, until Immie kissed Paige’s boyfriend, Jackson. But Immie didn’t actually kiss Jackson— Arch did. Arch is gay and hiding it from their abusive father, and his sister has lied for him, straining her friendship with Paige. Now Immie and Paige have their eyes on the same guy, Rohan Singh, a charming transfer student homesick for London despite his crush on Immie keeping him grounded. On top of all that, there’s an arsonist loose at school. Amid these complicated connections, the friends hide their personal pain. Immie’s desire for independence, Paige’s parents’ neglect and her toxic struggle for absolute perfection, Arch’s secret flirtation with Jackson, and Ro’s anger at his father’s affair may burn them all down before anything else does. The quartet of vivid characters—in particular, troubled, fierce Paige—is a strength of the book, and the romances, one straight and one queer, are sweet. But the narrative never quite gels, trying as it does to balance too many plotlines and shifting in tone between melodrama and slice of life rather than blending both into a cohesive whole. Immie, Arch, and Jackson read as White; Paige is Jewish and Chinese American, and British Ro’s name implies Indian descent.

A soap opera with real issues told with earnest heart.