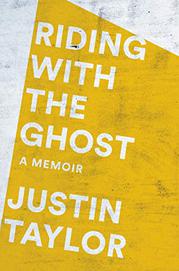 RIDING WITH THE GHOST

A memoir about coming to terms with the life and death of a father, a man who no longer wanted to live.

Though Taylor has previously published two well-received collections of short stories as well as the thematically ambitious novel The Gospel of Anarchy (2011), this memoir sets a new literary standard for his work, as he aims higher and reaches deeper. Here, the author shows the precision and command of tone that has informed the best of his stories, but there’s something more at stake—for both the writer and his readers. In 2013, his father “had decided that he would end his life by throwing himself from the top of the parking garage at the Nashville airport.” He felt that unemployment, divorce, depression, Parkinson’s disease, and other signs of poor health had left him with no reason to live. He was saved at the time by family intervention—the author, who had distanced himself, played a minimal role—but never again found much reason to live before dying, alone, four years later. In this deeply reflective, sensitive narrative, Taylor not only explores the last decade of his father’s life, but also the aftermath, when he and his family were forced to pick up the pieces and find a way forward. “The silence since he has been gone is unimaginable,” he writes. “It terrifies and unsettles, but also—I won’t mince words here—exhilarates and relieves…I’m not saying I’m glad he’s gone. I am saying that I feel the absence of his suffering just as palpably as, for so long, I felt its presence. A storm has passed, a calm prevails: the ‘peace’ of the apt platitude.” His father’s isn’t the only ghost with whom he must come to terms, and there’s plenty of additional insightful observations about the stories we tell ourselves and the differences between the way we shape a story and the way we live our lives.