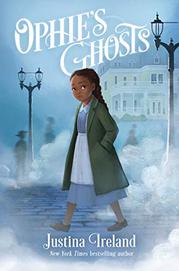 A 12-year-old Black girl in 1920s Georgia learns she has the ability to commune with ghosts—and goes on to help solve a mysterious death.

Ophelia “Ophie” Harrison was startled awake by her father’s urgently telling her to grab their emergency money, wake her mother, and escape to the woods—just before White men came and burned their house to the ground. The next morning, she found out those same men had already murdered her father; what she had seen was his ghost. Her mother, dealing with her own grief and their new reality, is not ready to hear of Ophie’s talent, so after they move north to live with Aunt Rose and her family in Pittsburgh, Ophie is forced to keep quiet about it. She longs to attend school but starts working with her mother at Daffodil Manor, home to one of the city’s wealthiest families, so that they can save up for their own place. She soon discovers that ghosts fill the manor; one in particular, Clara, helps her satisfy the demands of the curmudgeonly old White lady who is their employer. In return, Ophie is determined to find out how Clara died. Once again, Ireland weaves together the fantastical with historical realities that Black Americans have faced. Ophie’s optimistic personality and the intrigue-filled story will keep pages turning all the way to the satisfying conclusion.