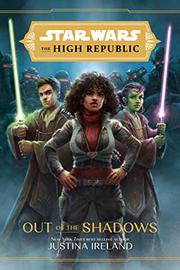 Out of the Shadows

As the dastardly Nihil inflict turmoil and bloodshed in the Outer Rim, the Republic and Jedi Order scramble to eliminate the space pirates and bring peace to the galaxy.

Rumors abound of ships forced out of hyperspace into realspace and then disappearing; the Nihil threat, it seems, is growing bolder and fiercer. Following the mysterious death of her mother, 18-year-old Sylvestri Yarrow is struggling to survive as a hauler. Then the Nihil launch a sudden attack on her ship in the Berenge sector, a rarely traveled part of space. Fleeing to Coruscant to alert the Republic, Syl falls into a political quagmire involving one of the wealthiest families in the galaxy as well as the strangely coveted Berenge sector, which might be crucial to the Nihil’s hyperspace disruptions. The whole ordeal pulls a quartet of Jedi into the mix: Jedi Master Cohmac Vitus; his Padawan, Reath Silas; Jedi Knight Vernestra Rwoh; and her Padawan, Imri Cantaros. Meanwhile, concerns over the Order’s involvement with the Republic in its campaign against the Nihil plague the four Jedis. Containing a dizzying number of overarching storylines and characters, this latest installment set in the High Republic era nonetheless excels, with enough political intrigue and intricate thrills once it yanks its disparate threads together. Per usual, Ireland’s firm grasp of this universe keeps it all from running amok.

An essential tome for die-hard Star Wars fans, although others will find much to enjoy.