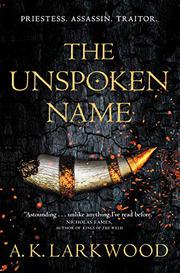 Larkwood's debut, the first of a fantasy series, begins in familiar fashion as a warrior-maiden adventure and gradually develops into a love story.

In this imaginative but never fully convincing universe, places may be reached via magical gates leading through a maze of dead and dying worlds. Magic powers derive from a rare, innate ability combined with power vouchsafed by a patron god. Csorwe is of a hominin race that sports tusks—these are functionless and, unfortunately, impossible to visualize without thinking "piggish." In a narrative rendered in crisp, vivid prose, Csorwe serves the oracular shrine of a god—the Unspoken Name—but is destined soon to sacrifice herself. Then Sethennai, a wizard—his race has Spock ears—requesting a prophesy about the mysterious and powerful Reliquary of Pentravesse, offers her a choice: serve him and live, or marry the god and die. Csorwe chooses life and becomes Sethennai's ninja. The wizard, formerly the ruler of the city Tlaanthothe, needs her to help reclaim his position from a scheming rival. Later, during a quest to secure the Reliquary, she will clash with the Qarsazhi, imperial interworld extortionists, and their powerful young wizard Shuthmili, who's fated to be absorbed by their enforcement arm but, like Csorwe, never conceived other possibilities. Until this point, the story meanders, but finally the author finds a unique voice no longer dependent on boilerplate action, chases, escapes, torture, and fights. And when Csorwe and Shuthmili meet and fumble toward a relationship, we recognize heartfelt emotion, real substance, and an emergent theme: loyalties and the choices we make that engender them. These, along with the strong female leads, are solid foundations upon which to build.

A moderately promising entry that should find an audience.