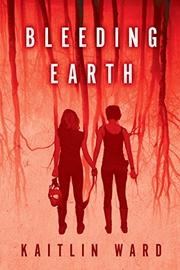 “Bones Found to Be of Human Origin, Blood Beginning to Fester.” In the spirit of M.T. Anderson’s Thirsty (1997), Ward’s apocalyptic novel will have readers checking the ground beneath their feet after each turn of the page.

Readers meet Lea, a confident teenage girl who just wants to hang out with her friends and spend quality time with her new girlfriend, Aracely. But when the Earth begins to ooze blood and other body parts, Lea’s hometown becomes a war zone, with citizens fighting over fresh water and food rations, and Lea becomes ever more concerned with her dwindling faith in humanity, her declining mental state, and the blood that won’t stop rising. To her family and close friends, Lea’s sexuality is largely a nonissue, which is refreshing (and sensible, considering the impending apocalypse); furthermore, readers looking for the next LGBT heroine will love Lea’s strong-willed attitude. The frightful moments are craftily deployed, creeping up and startling readers when they’re least expecting it. And the government PSAs regarding the blood that punctuate Lea’s narration are enough to panic even the most fearless of readers, their commonplace mundanity highlighting the freakishness.

Grisly and sickening (but in the best way possible), the novel more than delivers on its promise of the macabre for lovers of horror, and curious readers will close the book with countless questions about religion, science, and human nature.