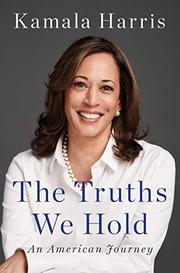 THE TRUTHS WE HOLD

California’s junior senator limbers up “to be a joyful warrior in the battle to come.”

Harris (Smart on Crime: A Career Prosecutor's Plan to Make Us Safer, 2009, etc.), who recently announced her candidacy for president, follows immediately with an entry in the genre that might be called the Obligatory Campaign Biography, blending how-did-we-get-here memoir with political platform. In that sense, this book is by-the-numbers, with all the expected elements. Yet the author’s background is unusual enough on many scores to set her autobiography apart: She is the first American of Indian or Jamaican descent to serve in the Senate and the first African-American senator from California, having served prominently and sometimes controversially as the state’s attorney general. Countering the whispering birther movement surrounding her early campaign, Harris recounts that she was born in Oakland of mixed descent, with an Indian immigrant mother who “understood very well that she was raising two black daughters” and took pains to “make sure we would grow into confident, proud black women.” The author excelled in school but, she recounts in a moment of reversal, failed her first effort at the bar, overcoming defeat to take a visible role in the Bay Area legal community. Her efforts at judicial reform figure in her timely call for an overhaul of sentencing procedures, all as part of a platform of “what I see as women’s issues: the economy, national security, health care, education, criminal justice reform, climate change.” Harris also reveals a policy-wonk side, enthusiastically addressing issues such as cybersecurity (“a new front in a new kind of battle”) and economic inequality (“with millions of Americans hanging by a thread,” she deftly writes of the current president, “the White House reached for scissors”). The talking points of the book are surely those she’ll be revisiting in speeches and debates to come, and suffice it to say that you can bet Jamie Dimon won’t be endorsing her.

Fits well alongside such politico-aspirational books as Barack Obama’s Dreams from My Father, and better written than most in the category.