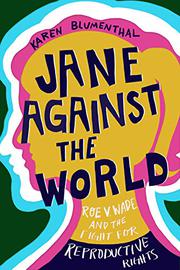 JANE AGAINST THE WORLD

Roe v. Wade and the Fight for Reproductive Rights

An account of the tumultuous struggle for abortion rights in the United States.

Blumenthal kicks off her narrative with a thrillerworthy scene: the 1972 raid by Chicago police on the eponymous “Jane,” an underground abortion referral service. The book then pulls back to offer an engaging history of developments in reproductive rights that contributed to the landmark Roe v. Wade Supreme Court decision. Along the way there are brief biographies of key figures—some as famous (or infamous) as Anthony Comstock and Margaret Sanger, some virtually unknown but no less fascinating—placed within a nuanced context and punctuated by “Pregnant Pause[s]”: occasionally humorous, sometimes infuriating, often poignant sketches detailing the history of biological knowledge, birth control techniques, legal issues, popular opinion, and religious proclamations. A deep dive into the circumstances, personalities, deliberations, and compromises involved in Roe v. Wade (along with the frequently overlooked companion cases) takes up a dozen chapters, followed by a brief consideration of the consequences, backlash, and steady succession of laws and court cases chipping away at the decision. An epilogue brings the discussion up to the appointment of Justices Neil Gorsuch and Brett Kavanaugh. Blumenthal’s bibliography demonstrates the depth of her research, including online, archival, and primary sources. This riveting book, enhanced by historical photographs, also addresses racial bias, the eugenics movement, and other critical related subjects.