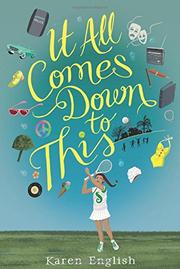 IT ALL COMES DOWN TO THIS

Twelve-year-old Sophie is the younger of two sisters in an upper-middle-class African-American family in 1965 Los Angeles.

Her older sister, Lily, is about to leave for college, and Sophie worries about her life without her. It is obvious that her parents’ marriage is having problems, and she can no longer count on Jennifer, the one white girl who had been her friend. Despite some misgivings, Sophie decides to try out for a play at the community center, which will bring her in close contact with the prejudiced girls in the neighborhood. In addition, the new housekeeper, Mrs. Baylor, seems to have it in for her. When Mrs. Baylor’s son begins doing odd jobs around the house, sparks fly between him and Lily—but despite Nathan’s success at college, Sophie’s mother deems him unsuitable for Lily due to his class and dark complexion. Nathan’s arrest during the Watts riots brings things to a head. This is a wonderfully written novel, one that manages to address complex subjects such as racism and colorism without sinking beneath them. Both the differences and similarities between the worlds of Sophie’s family and Nathan’s are handled with nuance. Most of all, this is an impressive coming-of-age story whose fully realized protagonist is surrounded by a rich supporting cast. Cultural details artfully evoke the tenor and tone of the times.

A slice of African-American life seldom explored in stories for young people and a must for readers of middle-grade fiction.