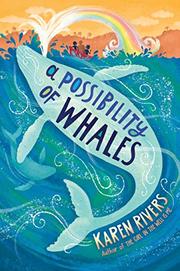 A POSSIBILITY OF WHALES

Rivers introduces two middle schoolers who could help each other: Natalia, the motherless, paparazzi-plagued daughter of a loving, famous actor, and Harry, a transgender classmate who’s embracing his male identity in spite of his intolerant father’s rejection of his true self.

Natalia, new to Harry’s small, Canadian community, and her earnest, ebullient father, Xan Gallagher, share an understanding of the boy’s needs, but her classmates are more inclined toward ridicule. Unfortunately for Natalia, in an effort to find accepting male friends, Harry often pushes back against her yearning for a BFF. She needs one badly. Adolescence is sneaking up on her; it’s not a change she welcomes, and she feels it’s especially hard to navigate this complicated passage without the mother who apparently rejected her at birth. A scene in which she tries to select products for her first—unexpected—period in a supermarket is especially touching. Harry’s situation is ultimately helped by Xan’s intervention with Harry’s mildly star-struck parents. The tale is told in alternating third-person voices, but Natalia’s is far better captured than Harry’s; his complex needs and emotions are never fully explored the way Natalia’s are. In fact, Harry’s predictable history of transphobic assault, forced use of the girls’ bathroom, humiliation in front of his classmates, and constant deadnaming make him a collection of the pitiable tropes that are familiar to cis audiences but likely discouraging and alienating to trans readers. Harry, Natalia, and Xan all present as white.

A tale that’s half engaging but never effectively plumbs its full potential.