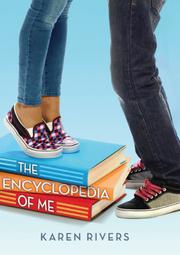 THE ENCYCLOPEDIA OF ME

Cleverly woven through the titular encyclopedia—with entries as seemingly mundane as “Apple” and “Oxen”—is the touchingly real and often humorous story of a preteen’s struggles with family, friendship and first love.

Isadora “Tink” Aaron-Martin, nearly 13, means to make the most of her recent grounding by using her time on house arrest to write an encyclopedia, heavily annotated with footnotes. Frustrated by her reputation as the peacemaker, Tink’s entries about life with an autistic brother are fresh and painfully honest. Rivers doesn’t tiptoe around the destructive impact the syndrome can have on a family. Rather, through Tink, she explores what it’s like to grow up in a house where everyone is constantly walking on eggshells, waiting for the next violent outburst. But family isn’t the only place where Tink feels invisible. She also walks in the shadow of her “best friend,” Freddie Blue Anderson, who seems to care more about being “pops” (popular) than about Tink. It isn’t until a blue-haired skateboarder named Kai moves in next door that she gradually finds the strength to put herself first, both at home and at school.

Though the footnotes feel gimmicky and distracting, readers will likely be able to look past them (or just skip over them) and cheer for Tink as she comes into her own.