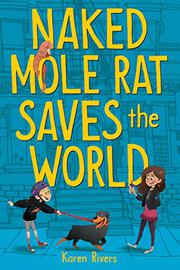 Kit and Clem are best friends, and both are dealing with life-changing adversity.

Kit is tiny and afflicted with both alopecia universalis (a complete lack of hair that strangers interpret as a result of chemotherapy) and a dysfunctional mother who named her “kit”—not Kit—as a reminder to herself to “keep it together.” Clem, a member of her Latinx family’s acrobatic team, is badly injured during a televised performance. Once she’s recovered from the worst of her injuries, Clem endures her distress by taking on an angry goth identity that contrasts sharply with her previous image. Meanwhile, kit, who is white, copes with anxiety (mostly caused by her mother) by turning into a naked mole rat (the ugly animal her mother often compares her to) and scurrying for cover—or so she believes. The girls’ stories are presented in third-person chapters that seamlessly alternate, not only providing an intimate view of each character’s largely hidden despair, but also revealing their bemused, mostly concealed judgments of each other, as their coping mechanisms serve to drive them apart. A rich cast of secondary characters enhances the tale, including kit’s mom’s somewhat witchy helper and the young teens’ former friend, a kindly boy who has many problems of his own. An author’s note explores anxiety disorder.

A warm coming-of-age story populated with a cast of memorable characters.