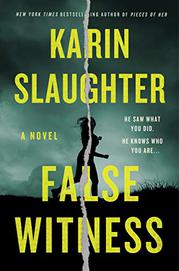 A master of the no-holds-barred law enforcement thriller turns to legal intrigue, with shattering results.

A week before he’s to stand trial for the aggravated assault and rape of DataTel district manager Tammy Karlsen, car-dealership scion Andrew Tenant fires his lawyer and asks for a new one: Leigh Collier, a rising star at an Atlanta white-shoe firm. Originally baffled by the request, Leigh quickly realizes that her new client has a special reason to have asked for her: He’s recognized her from a magazine photo as the older sister of Callie, the babysitter who killed his father, Buddy Waleski, when his latest pedophile assault on her turned violent 23 years ago. In fact, the truth is even darker than that. Leigh was an active participant in the killing. Now she's determined to do everything she can to torpedo the defense she's preparing for Andrew, who’s accused of stabbing Tammy Karlsen in exactly the way Callie stabbed his father, while persuading both her client and her watchful senior partner that she’s doing her utmost to represent him. As she learns more and more particulars about the case and her client, Leigh realizes that her plan doesn’t go nearly far enough. Andrew is guilty of this assault and others, but he doesn’t just want her to get him off: He plans to blackmail her into complying with a potentially endless series of demands. How can she strike back at a monster who holds all the cards? Only by tapping into the depthless power of sisterhood with Callie, who’s descended into addiction but still loves Leigh with a ferocity that makes the pair of them as dangerous as the man who’s targeted them.

Combines disarming sensitivity to the nuances of the tangled relations among the characters with sledgehammer plotting.