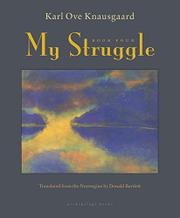 From the My Struggle series, volume 4

The narrator of the six-volume memoir-novel confronts his late teens, in which he defies his father by behaving much like him.

As the book opens, Karl Ove is 18 and bent on proving his independence. Instead of going to college, he’s taken a teaching job at a school in rural north Norway, much as his father did a few years earlier. Karl Ove, though, is determined to use the gig as a steppingstone to becoming a writer, using his off hours to work on his fiction. Naturally, his plans are undone in short order. Neighbors, fellow teachers and even some students in the tiny town come knocking unannounced, hard-drinking parties are the sole entertainment, and teaching is more challenging than he’d expected. After an agonizing hangover, the story shifts to Karl Ove at 16, as his mind operates on two tracks: cultivating his dreams of being a writer (he finagles a gig writing record reviews for a paper) and scheming to lose his virginity. Standing in the way of the latter goal are his pretentiousness, a growing alcohol habit to match his dad’s and a premature ejaculation problem, but he’s keenly aware of only the last issue. Of the four books in this series published in English thus far, this one is the most rhetorically conventional: Knausgaard employs humor, irony and melodrama in ways that he studiously avoided in previous episodes. But he’s done so not to pander but to criticize, echoing the mindset of a sex-obsessed and callow young man still in his teens and unshaped as a person and as a writer. And when the story arrives at its climax (and you can likely guess what that involves), Knausgaard uses the plainspokenness that defined his previous books to powerfully evoke the depth of his obliviousness, the hollowness of his triumph.

An entertaining portrait of the artist as a young lout.