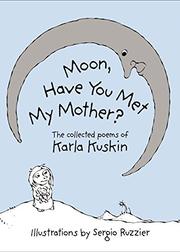 MOON, HAVE YOU MET MY MOTHER?

Here are anthologized some 309 pages worth of poems from one of children’s literature’s most well-established poets. Arranged thematically, the collection moves chapter by chapter from consideration of dogs, cats, and other animals, to the seasons, to contemplation of the self, and finally to the moon of the title. Kuskin (The Animals and the Ark, 2002, etc.) has been recognized for her sense of rhythm and her ability to fine-tune a poem for the youngest audiences; indeed, many of these poems appeared in Harper’s “I Can Read” books for beginning readers. When she is at her best, she can form, very simply, an image that will allow a reader to see what is being described in new ways: “There is a bed / inside my head / and when the day is long / I curl within / my outside skin / and sing myself a song.” Unfortunately, the encyclopedic nature of this collection results in an inevitable feeling of sameness about many of these poems; the poet’s frequent habit of undercutting a poem in its coda—“Dear shell, / you curve extremely well / . . . / Dear shell, / you also smell”—repeated over and over loses its freshness and becomes nothing but a cute device. Despite the thematic arrangement, one gets the sense that many of these poems, which when originally published bore some relationship of form to one another (there are a great number of riddle-poems, for instance, here scattered among the others, as well as the very simple verses for beginning readers), were simply dumped in with little regard for how they relate to their neighbors in this new incarnation. Kuskin’s verse is best when presented intimately, to specific audiences; this mammoth collection makes what can be delightful in small servings cloying and tiresome when biggie-sized. Ruzzier’s (Don’t Know Much About Space, not reviewed, etc.) cartoons are fanciful but occasionally rather grotesque—they do not noticeably contribute to the success of the volume, but neither do they materially detract. For those who want it all in one place. (Poetry. 5-10)