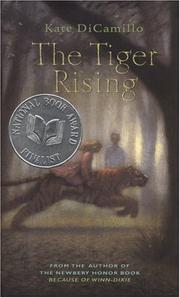 Themes of freedom and responsibility twine between the lines of this short but heavy novel from the author of Because of Winn-Dixie (2000). Three months after his mother's death, Rob and his father are living in a small-town Florida motel, each nursing sharp, private pain. On the same day Rob has two astonishing encounters: first, he stumbles upon a caged tiger in the woods behind the motel; then he meets Sistine, a new classmate responding to her parents' breakup with ready fists and a big chip on her shoulder. About to burst with his secret, Rob confides in Sistine, who instantly declares that the tiger must be freed. As Rob quickly develops a yen for Sistine's company that gives her plenty of emotional leverage, and the keys to the cage almost literally drop into his hands, credible plotting plainly takes a back seat to character delineation here. And both struggle for visibility beneath a wagonload of symbol and metaphor: the real tiger (and the inevitable recitation of Blake's poem); the cage; Rob's dream of Sistine riding away on the beast's back; a mysterious skin condition on Rob's legs that develops after his mother's death; a series of wooden figurines that he whittles; a larger-than-life African-American housekeeper at the motel who dispenses wisdom with nearly every utterance; and the climax itself, which is signaled from the start. It's all so freighted with layers of significance that, like Lois Lowry's Gathering Blue (2000), Anne Mazer's Oxboy (1995), or, further back, Julia Cunningham's Dorp Dead (1965), it becomes more an exercise in analysis than a living, breathing story. Still, the tiger, "burning bright" with magnificent, feral presence, does make an arresting central image. (Fiction. 10-12)