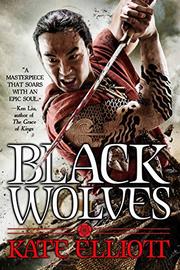 King Anjihosh now rules the land known as the Hundred, having wrested it away from fearsome demons (they are strong, all but unkillable, and have the ability to manipulate human memories) in battle. His elite troops, the Black Wolves, operate mostly in secret, and of these the most trusted is Capt. Kellas. Princess Dannarah dreams of becoming a reeve—royal scouts and messengers who pair-bond with and ride ferocious giant eagles—and resists being married off to cement a foreign alliance. But then her brother, Prince Atani, overhears something he shouldn’t have and runs away. Sent in pursuit, Kellas too learns more than is good for him. The narrative abruptly leaps 44 years into the future. Anjihosh is long dead. Kellas served his successor, Atani, until the latter was treacherously murdered, whereupon Kellas was retired in disgrace and the Wolves disbanded. Now, King Jehosh, fearing a power struggle with his mother, Queen Chorannah, recalls an old but still hale Kellas. Dannarah, once marshal of the reeves but deposed by Jehosh in favor of incompetent sycophants, and Kellas, united in their loyalty to the late Atani, trust the monarchs not at all—and the mystery of Atani’s death rankles. Sophisticated, multifaceted worldbuilding sparked by original flourishes, populated by characters we quickly come to care about and whose motivations drive intricate, absorbing conspiracies—the whole vehicle mired in the kind of ugly, messy structure designed largely to conceal what’s going on from readers and characters alike.

One seriously annoying flaw detracts from what otherwise is a stellar performance.