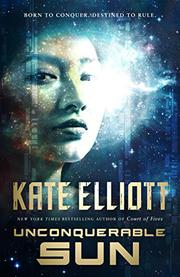 Clash of empires: an action-packed yarn loosely based on historical precedent, the sort of flawlessly plotted, high-tension science fiction Elliott's been threatening to write for some time.

The story precipitates us into a kind of modernized Chinese-flavored Alexandrian Macedonia, with a partially collapsed "beacon" network allowing instantaneous interstellar travel, commerce, and war. It's the sort of society where everything of importance happens in front of the cameras, where broadcasting is indistinguishable from propaganda. Under queen-marshal Eirene, the matriarchal Republic of Chaonia has expelled the Yele and Phene occupiers. Eirene, unaccountably, grudges her daughter and heir, Princess Sun, a word of praise, no matter how stellar Sun's achievements. Sun's Companions are aides drawn from her relatives and the scions of powerful nobles, though some of the same ambitious families and court factions would prefer to see Sun ousted or dead. Meanwhile, the rich, powerful Phene, with their four arms and profoundly creepy secrets, become alarmed at Chaonia's success and prepare to strike. The two main narrative viewpoints complement one another. Third-person past-tense Sun must survive constant threats to her life and freedom while conducting battles, making plans, exposing traitors, controlling her wayward impulses, and asking the questions everybody else shrinks from. First-person present-tense Persephone of House Lee struggles to gain independence from her insidious and possibly treacherous family and prove her loyalty to Sun. The upshot is a maelstrom of palace intrigue, interstellar back-stabbing, devious plots, treachery, blistering action, ferocious confrontations—and a heroine for the ages, tough, resourceful, loyal, intelligent, honorable, courageous, and utterly indomitable.