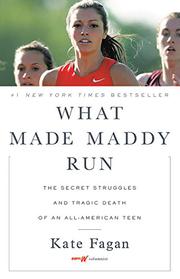 WHAT MADE MADDY RUN

The Secret Struggles and Tragic Death of an All-American Teen

What led to one teen athlete’s suicide.

When Maddy Holleran began attending college at the University of Pennsylvania and continued her athletic career as a member of the track team, she and everyone who knew her could only imagine the best for this outgoing and popular 19-year-old. But as her freshman year progressed, Maddy slipped into depression, falling deeper and deeper into a black pit that surprised and confused her. She attempted to maintain appearances, writing cheery text messages and Facebook posts, but inside, she felt increasingly numb and unhappy. Friends, relatives, and counselors told her it was normal, the type of homesickness and transitional unhappiness almost every first-year student experienced, and that she would get through it. But they were all wrong. Using Maddy’s text messages, emails, letters, and information compiled from family and friends, ESPN columnist Fagan (The Reappearing Act: Coming Out as Gay on a College Basketball Team Led by Born-Again Christians, 2014, etc.) expertly re-creates the last months of Maddy’s life. Interspersed with Maddy’s story is an analysis of the type of commitment that is required to be a college athlete and the building pressure that many college students feel to appear happy, healthy, and successful in their given paths, despite any underlying doubt or despair. The author pays particular attention to the increasingly prominent role of social media and the disparity when one compares the online persona of someone like Maddy, who gave no definite indication that something was seriously wrong, with the actual issues at hand. Echoing the feelings Maddy must have felt, Fagan includes personal reflections on her own college athletic career, her desire to quit playing basketball, and the difficulty she had in figuring out what to do.

A compassionate and frank look at depression and the social pressure faced by many college students as seen through the eyes of one young woman.