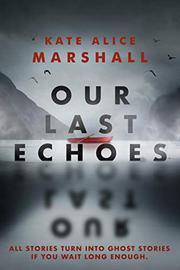 A search for her long-lost mother leads Sophia to a mysterious island where the mist hides supernatural secrets.

Eighteen-year-old Sophia Novak grew up in foster care after her mother allegedly died when she was 3. But after a girl named Abby Ryder contacts her out of the blue asking questions about her connection to Bitter Rock—a remote island off the coast of Alaska and the site of several previous disappearances—Sophia talks her way into an internship studying birds at the island’s research center. Upon arriving, she’s immediately warned of the danger of going out in the mist. She teams up with Abby and Liam Kapoor, the son of one of the researchers, as they investigate myriad strange phenomena, from Sophia’s reflection—which does not accurately match her—to the appearance of an ominous six-winged beast. Filled with chilling moments, Marshall’s fantastically immersive narrative is peppered with documentary-style transcriptions of audio and video recordings—including flashbacks that slowly tease out the story of what happened the night Sophia’s mother disappeared. Occasional interviews with paranormal researcher Dr. Ashford contain a thread that connects to Marshall’s Rules for Vanishing (2019). Sophia is White; the supporting cast is broadly diverse.

Beautifully haunting and sure to keep readers up all night.