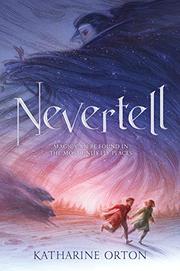 Born in a gulag, 12-year-old Lina has known only deprivation, pain, and cold, but a daring escape proves that the outside world holds more mystery than she could have ever imagined.

Everyone inside the wire knows that the chances of surviving an escape are minimal. But when plucky Lina is drawn into a madcap breakout scheme, she agrees to help; her best friend, Bogdan, determined to protect Lina, follows. Both children are desperate to reconnect with lost family and forge new lives outside. Their escape is thwarted at every turn, however, by mythic elements from forbidden tales that turn out to be frighteningly real: hidden powers, ghost hounds, and a preternaturally omnipresent sorceress possessing both a fanatical vendetta and a heart-wrenching secret. Orton weaves a somewhat far-fetched tale, seemingly drawing more on fantasy of her own devising than on Russia’s own rich folklore. As a result, the two salient aspects of the story—the Stalinist-era purges and prison camps and the magic—never fully cohere, and small gaps in believability tarnish what could have been a fascinating story. Although the story is rife with interesting personalities, Orton does little to flesh them out, and the limited third-person narration does little to advance the development of characters other than Lina. The story is largely redeemed, however, by some truly beautiful images and relationships; the warm friendship between Bogdan and Lina is a particular delight. Lina is literally Caucasian; Bogdan is Tuvan. Cai’s scratchy, flowing chapter heads enhance the fantastical atmosphere.