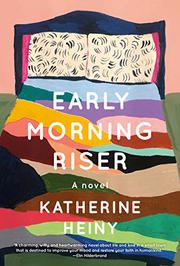 The author of Single, Carefree, Mellow (2015) and Standard Deviation (2017) brings us new characters to fall in love with in this novel about love, family, and community.

It’s easy to adore the characters Heiny conjures in her novels and short stories. They tend to be quirky and smart, caring and passionate. Jane, the protagonist of Heiny’s gentle, funny new novel, is no exception. When we first meet her, the year is 2002, and she's 26. She has just moved to small-town Boyne City, Michigan, from Grand Rapids by way of Battle Creek, to teach second grade at the local elementary school. Almost immediately—in the first month she's in town and the first sentence of the novel—she meets and falls for Duncan, a handsome, divorced woodworker in his early 40s who moonlights as a locksmith (they meet when she locks herself out of her new house), looks to Jane “like the Brawny paper towel man,” and, she later learns, not entirely to her surprise, has slept with pretty much every woman in the area. Both Jane, ever hopeful, and Duncan, ever appreciative, are pure charm (as are the book’s secondary characters: their Northern Michigan neighbors, friends, and family members). She is a creative teacher and all-around blithe spirit who enthusiastically procures all her clothes and household items at the local thrift store. (“Some of her thrift-store outfits were more successful than others,” we’re told.) He’s the kind of generous, easygoing guy who still shovels out the snowy driveway of his ex-wife, Aggie, as well as that of Jane; Jane’s best friend, Freida; and, eventually, Jane’s flinty mother. Duncan’s sole employee is a sweet young man named Jimmy who was initially “described to Jane by more than one person as ‘slow learning.’ ” After an accident for which Jane feels culpable, Jimmy becomes Jane’s responsibility, too. Eventually, Jimmy will bring Jane and Duncan together in a new way. Told episodically in chapters titled by year and covering a span of 17 years, Heiny’s book finds beauty and humor in connection and community, family and friendship, and the way love can develop and deepen over time.

A heartwarming novel with a small-town vibe that sparkles like wine sipped with friends under backyard fairy lights.