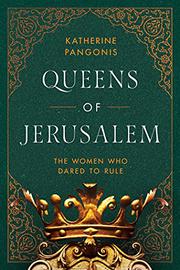 The Women Who Dared To Rule

A British historian explores the lives of the women who ruled Christian-captured Jerusalem, circa 1100.

Though chroniclers of the First Crusade left a “rich trove” of narrative sources for modern historians, most of these writers were also misogynist male clerics who minimized the achievements of many powerful women. To balance the historical record, Pangonis, who specializes in the medieval world of the Mediterranean and Middle East, considers the roles and deeds of the unsung queens of Jerusalem who ruled between 1099 and 1187. Crowned in 1118, Morphia was “the first woman to preside as queen over the Kingdom of Jerusalem for any length of time.” Like the royal female consorts who preceded her, her power to rule came from her husband, Baldwin II. But the four daughters she bore him each became rulers at different times of the four states of Outremer, the lands crusaders wrested from the Muslims. Pangonis pays particular attention to Morphia’s first-born daughter, Melisende, whom Baldwin groomed to rule Jerusalem. Like princesses who stood to inherit kingdoms in Europe, though, she could not be named sole inheritor and was forced to marry according to the wishes of her father and his nobles. That did not stop her from later refusing to step down in favor of the son who forcibly deposed her. Her willfulness would be recalled in the sometimes-scandalous actions taken by her sisters, female cousins, and, later, her granddaughter, Sibylla, the last queen of Jerusalem. Married to a “suitable” match as a teenager and then quickly widowed, Sibylla rebelled against royal expectations and married the landless son of a French lord. A complex historical narrative that celebrates female agency and a tale of family intrigue spanning generations, this book sheds light on the silenced women of a fascinating medieval bloodline.