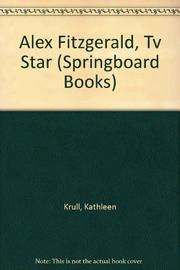 Krull's second book about her irrepressible heroine takes up the excitement and disappointments of show business. Now happily ensconced with her father in California while her mother works for a year in Japan, Alex is given the chance to audition for a part in rock star Rox Rox's latest video after making a triumphant appearance playing the piano at the fourth- grade Christmas play. In a flash, Alex—who has never previously heard of Rox Rox—goes into overdrive about her coming stardom. When she actually gets the job, her extreme enthusiasm begins to lose her friends and get her in trouble at school for inattention. When she discovers that she has been replaced with Rox's little sister (except for a shot of her hands playing the piano), her disillusionment is total. Alex has much energy, if not common sense, and Krull has a good ear for dialogue—some compensation for routine characters, language, and plot. An acceptable, if undistinguished, addition to young readers' collections. (Fiction. 8-10)