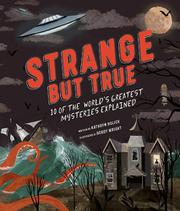 10 of the World's Greatest Mysteries Explained

Scientific explanations for mysteries that have given rise to fantastical stories.

Encounters with aliens and haunted houses, quests for lost worlds and monsters of the deep, mysteries of ancient tombs and those returned from the dead—all sparkle here both as stories and as targets for scientific examination in Hulick and Wright’s terrific collection of creepy events. “Every mystery has an explanation. Getting to the bottom of it is what science is all about,” writes Hulick. But that doesn’t keep her from giving full voice to the mysteries at the beginning of each episode. Having set the folkloric or legendary scene, and accompanied by transportingly spooky artwork from Wright, Hulick puts on her scientist’s cap and seeks to make sense of the mysteries. In some cases the answers are circumstantial (“people experience strange things in haunted houses because they’re expecting strange things to happen”) and in other cases, clear-cut, as in the photograph of the Loch Ness Monster that turned out to be a hoax (but not before gaining plenty of traction). The book touches down all over the map of mysteries, from telepathy, clairvoyance, and telekinesis to Mu and Atlantis, Yeti and Bigfoot, the kraken and the Bermuda Triangle. The tone is respectful of both the mystery and the conclusions, of which not all are the last word. “The truth is that the natural world is an amazing place.”

Science rules the day, but “at the same time, keep an open mind”: wise words.