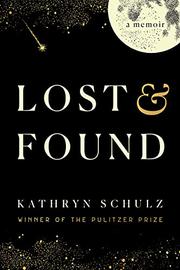 A Pulitzer Prize–winning New Yorkerstaff writer muses on the interconnectedness of loss and gain.

Losing her father made Schulz feel all too keenly how a once “familiar world [could suddenly] feel alien and inaccessible.” But in the year before he died, the author also met the woman whose presence would counterbalance her father’s devastating absence. In this memoir, Schulz transforms this extraordinary coincidence of major life events—death and falling in love—into an extended, philosophically edged reflection on the meaning of losing and its opposite, finding. Starting with the former, Schulz examines etymology. “The verb ‘to lose’ has its taproot sunk in sorrow,” she writes, but only around the 14th and 15th centuries did the word begin to expand in meaning to encompass “the circle of what we can lose.” Drawing on such disparate topics as the sudden disappearance of Malaysia Airlines Flight 370 in 2014 and the poetry of Elizabeth Bishop, Schulz observes that losses are devastating to us not just because “they defy reality but because they reveal it” in all its ephemeral fragility. In the second section, the tone lightens considerably as the author contrasts loss with two forms of finding: recovery, which “reverses the impact of loss,” and discovery, which “changesour world.” Her voice aglow with wonderment, Schulz then tells the story of how she met fellow writer C. A friend had introduced them via email, but the day they met, the author’s brain began the “life-altering organization” that eventually led to Schulz's offering C. her dead father’s wedding ring as a symbol of moving forward in love rather than remaining paralyzed for fear of future loss. Elegant and thought-provoking, Schulz’s book is as much a celebration of the circle of life as it is an elegant reminder to all that “we are here to keep watch, not to keep.”