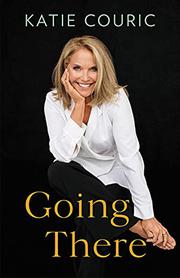 The veteran newscaster reflects on her triumphs and hardships, both professional and private.

In this eagerly anticipated memoir, Couric (b. 1957) transforms the events of her long, illustrious career into an immensely readable story—a legacy-preserving exercise, for sure, yet judiciously polished and insightful, several notches above the fray of typical celebrity memoirs. The narrative unfolds through a series of lean chapters as she recounts the many career ascendency steps that led to her massively successful run on the Today Show and comparably disappointing stints as CBS Evening News anchor, talk show host, and Yahoo’s Global News Anchor. On the personal front, the author is candid in her recollections about her midlife adventures in the dating scene and deeply sorrowful and affecting regarding the experience of losing her husband to colon cancer as well as the deaths of other beloved family members, including her sister and parents. Throughout, Couric maintains a sharp yet cool-headed perspective on the broadcast news industry and its many outsized personalities and even how her celebrated role has diminished in recent years. “It’s AN ADJUSTMENT when the white-hot spotlight moves on,” she writes. “The ego gratification of being the It girl is intoxicating (toxic being the root of the word). When that starts to fade, it takes some getting used to—at least it did for me.” Readers who can recall when network news coverage and morning shows were not only relevant, but powerfully influential forces will be particularly drawn to Couric’s insights as she tracks how the media has evolved over recent decades and reflects on the negative effects of the increasing shift away from reliable sources of informed news coverage. The author also discusses recent important cultural and social revolutions, casting light on issues of race and sexual orientation, sexism, and the predatory behavior that led to the #MeToo movement. In that vein, she expresses her disillusionment with former co-host and friend Matt Lauer.

A sharp, entertaining view of the news media from one of its star players.