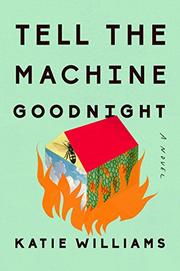 In her first book for adults, Williams imagines a not-too-distant future in which people find happiness with the help of machines.

It's 2035, and for the last nine years Pearl has worked as a technician for the Apricity Corporation, a San Francisco company that's devised a machine that, using skin cells collected from the inside of a subject’s cheek, provides “contentment plans” for those seeking happiness. (The firm’s name means the feeling of warmth on one’s skin from the sun.) The machine’s prescriptions veer sharply from the benign to the bewildering, telling one of Pearl’s clients to “eat tangerines on a regular basis,” “work at a desk that receive[s] more morning light,” and “amputate the uppermost section of his right index finger.” “The recommendations can seem strange at first…but we must keep in mind the Apricity machine uses a sophisticated metric, taking into account factors of which we’re not consciously aware,” Pearl reassures the client contemplating going under the knife, in a speech she has memorized from the company manual. “The proof is borne out in the numbers. The Apricity system boasts a nearly one hundred percent approval rating. Ninety-nine point nine seven percent.” Never mind the .03 percent the company considers “aberrations.” Pearl herself appears to be a generally happy person despite the current circumstances of her life. Her husband, Elliot, an artist, has left her for a younger, pink-haired woman, Val, who has her own secrets—yet Elliot persists in flirting with Pearl. Her teenage son, Rhett, has stopped eating, perversely finding contentment in dissatisfaction and self-denial. Pearl’s own contentment plan, which includes painstakingly building elaborate creatures from 3-D modeling kits, keeps her on a steady keel even as she yearns to rescue her son from his unhappy state. Following the trajectory of today’s preoccupation with self-help and our perhaps not-entirely-justified faith that technology can fix everything, Williams explores the way machines and screens can both disconnect us, launching us into loneliness, and connect us, bringing us closer to one another. In this imaginative, engaging, emotionally resonant story, she reveals how the devices we depend on can both deprive us of our humanity and deliver us back to it.

With its clever, compelling vision of the future, deeply human characters, and delightfully unpredictable story, this novel is itself a recipe for contentment.