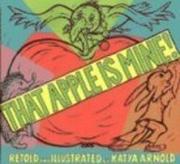 THAT APPLE IS MINE!

In this version of a tale by early–20th-century Russian author Vladimir Suteev, Hare, Crow, and Hedgehog squabble so noisily over ownership of a fallen apple that they wake Bear, who suggests that they cut it into equal portions. Hedgehog gratefully gives Bear the fourth quarter as the peacemaker’s share—leaving a disconsolate worm to crawl away muttering that the apple was actually hers. Robbing the argument of rancor by having all of the animals (except Worm) smiling throughout, Arnold places her heavy-lined figures over simple collages constructed from large, irregular pieces of painted paper; the effect is loud, brash, kaleidoscopic. Political subtext aside, this makes an enlightened alternative to such trickster tales as Mirra Ginsburg’s Two Greedy Bears (1976), in which the sly arbitrator gets the lion’s share of the treat. (Picture book. 5-7)