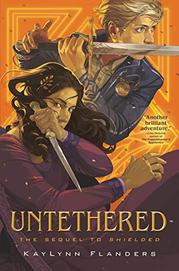 From the Shielded series, volume 2

The royal families of Hálendi and Turia come together once more to fight against the threat of ancient mages who seek to control the entire Plateau in this sequel to Shielded (2020).

A royal wedding in the neighboring kingdom of Riiga proves to be a trap designed to lure the kings of both Hálendi and Turia, but the newly crowned King Ren of Hálendi manages to evade it. Meanwhile, Princess Chiara of Turia, herself possessing no magic, formulates a plan to find her kidnapped father and prove herself useful to her family. Ren volunteers to go after her and agrees to help her with her quest. In the process, they discover that what the mages are really after are the keys to the mythical Black Library, which contains long-hidden powerful artifacts and records of ancient mages’ knowledge—and that they will use any means at their disposal to find these keys and the location of the library itself. This sequel introduces welcome new characters as well as bringing Jenna, Enzo, and Mari back into the fold, and the villains become more developed characters. While slow to start, the adventure shifts back into gear in the second half with plenty of action sequences amid the chaste, blooming romance that develops between Ren and Chiara. Characters’ skin tones range from pale to olive.

A sequel that delivers on the worldbuilding set up by its predecessor.