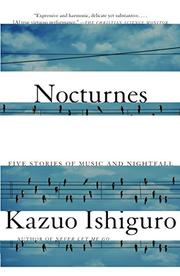 Five Stories of Music and Nightfall

A collection of five stylish stories from Ishiguro (Never Let Me Go, 2005, etc.).

As indicated by both the title and subtitle, all the stories in this fictional equivalent of a concept album concern musicians and the evening. But even more holds them together. All are first-person narratives (four of them by musicians) and most have a recurring motif of exchanging early promise for something—a marriage, a career, maybe both—that one settles for, once the daylight of youth has given way to the twilight of middle age. When one underachiever remarks “I’m only forty-seven,” the woman on whom he had a college crush, now married to his best friend, replies, “Only forty-seven. This ‘only,’ this is what’s destroying your life. Only, only, only. Only doing my best.” That story, “Come Rain or Come Shine,” is the most audacious in terms of tone, a very funny narrative, almost emotionally slapstick, about a very sad marriage. The writing is so exquisite throughout that the reader forgives the fact that at least two of these stories don’t make much literal sense. In “Malvern Hills,” an otherwise subtle story about a young guitarist who believes he has a career in music, and two married couples who have become resigned to their fates, the narrator keeps auditioning for electric bands with an acoustic guitar. The title story, the longest and strangest, concerns a session saxophonist who has somehow been persuaded to have plastic surgery on his face as a big career move. (Who really cares what a session or jazz musician looks like?) But even though there are a few false notes, the tonal command sustains perfect pitch.

Like sophisticated literary mood music, this book lingers in the memory, ringing true in theme and metaphor even when lacking plausibility.