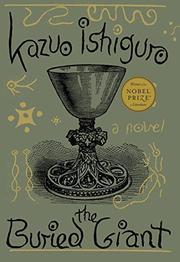 A lyrical, allusive (and elusive) voyage into the mists of British folklore by renowned novelist Ishiguro (Never Let Me Go, 2005, etc.).

There be giants buried beneath the earth—and also the ancient kings of Britain, Arthur among them. Ishiguro’s tale opens not on such a declaration but instead on a hushed tone; an old man has been remembering days gone by, and the images he conjures, punctuated by visions of a woman with flowing red hair, may be truthful or a troubling dream. Axl dare not ask his neighbors, fellow residents of a hillside and bogside burrow, for help remembering, “[f]or in this community, the past was rarely discussed.” With his wife, who bears the suggestive if un-Arthurian name Beatrice, the old man sets off on a quest in search of the past and of people forgotten. As it unfolds, Axl finds himself in the company of such stalwarts as a warrior named Wistan, who is himself given to saying such things as “[t]he trees and moorland here, the sky itself seem to tug at some lost memory,” and eventually Sir Gawain himself. The premise of a nation made up of amnesiac people longing for meaning is beguiling, and while it opens itself to heavy-handed treatment, Ishiguro is a master of subtlety; as with Never Let Me Go, he allows a detail to slip out here, another there, until we are finally aware of the facts of the matter, horrible though they may be. By the time the she-dragon named Querig enters the picture, the reader will already well know that we’re in Tolkien-ish territory—but Tolkien by way of P.D. James, with deep studies in character and allegory layered onto the narrative. And heaps of poetry, too, even as forgetfulness resolves as a species of PTSD: “I was but a young knight then….Did you not all grow old in a time of peace? So leave us to go our way without insults at our back.”

Lovely: a fairy tale for grown-ups, both partaking in and departing from a rich literary tradition.