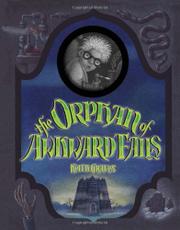 THE ORPHAN OF AWKWARD FALLS

The creator of such picture books as Frank Was a Monster Who Wanted to Dance (1999) and Three Nasty Gnarlies (2003) dishes up a first novel seasoned with the same delightfully twisted, ghoulish sensibility.

Immediately upon arriving in Awkward Falls, a small Manitoba town known for its canned sauerkraut and its Asylum for the Dangerously Insane (“both,” notes the narrator, “to be avoided at all costs, as one was likely to cause gas, and the other, death.”), 12-year-old Josephine meets agemate Thaddeus Hibble. Thaddeus is a scientific genius who has lived alone since infancy on an all–junk-food diet supplied by a robot butler and paid for by re-animating the dead pets of local matrons. Together the two are plunged into personal danger and worse at the clutching hands of hunchbacked lunatic cannibal Fetid Stenchley, former lab assistant and Asylum escapee. With aid from a supporting cast of colorful locals, a half-rotted corpse brought back to partial life and a ravening herd of chimerical monsters created in a secret biotechnology lab, Graves crafts a quick-moving plot composed of macabre twists. These are made all the ickier for being presented in significant part from Stenchley’s point of view. Wordless opening and closing sequences, plus a handful of interior illustrations, both fill in background detail and intensify the overall macabre atmosphere. The central characters receive just, if, under the circumstances, not necessarily final deserts.