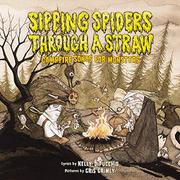 SIPPING SPIDERS THROUGH A STRAW

There’s no printed music but few readers will feel the lack, as DiPucchio expertly recasts 18 chestnuts into rousingly icky versions that practically sing themselves. Introducing such soon-to-be-favorites as “Do Your Guts Hang Low?” “99 Bottles of Blood on the Wall” and the genuinely revolting “Blow, Blow, Blow Your Nose,” this collection makes Judy Sierra’s Monster Goose (2001) and even Alan Katz’s takeoffs seem positively restrained. As is his wont, Grimly spatters his dark scenes with unidentifiable substances and populates them with grotesquely misshapen creatures—who, thankfully, look down or aside rather than directly out at viewers. Children who enjoy being creeped out won’t be able to get enough: “Home, home of the strange, / where the feared and the freaks come to play. / Where the stench in the air / comes from goon underwear / and the kids are all pasty and gray.” All together now. (Poetry. 8-12)