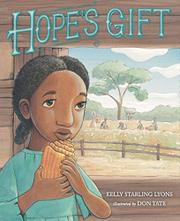 During the Civil War, an enslaved girl awaits her father’s homecoming and emancipation.

Hope’s father gives her a conch shell the Christmas Eve that he runs away to fight for the Union Army; he tells her that the sound she hears is “the sound of freedom.” Through the following months, as news of the war filters through the cotton fields and the slave quarters, Hope finds strength and courage listening to her shell. Then the best news of all is whispered from ear to ear: President Abraham Lincoln is issuing the Emancipation Proclamation. Nothing much changes on the plantation, though, until finally Papa arrives with other “colored soldiers” and takes his family into his arms and away from slavery. Lyons gives Hope a strong and very sympathetic voice, while Tate uses colored pencils and gouache in a folk-art style to imbue the characters with dignity. The stark fact that Hope, a child, is sent to work in the cotton fields is stated in a matter-of-fact tone, though the illustrations are softened through a muted palette that helps manage the horror.

A warm story about the love of a family and the jubilation of freedom; it commemorates the 150th anniversary of the Emancipation Proclamation.