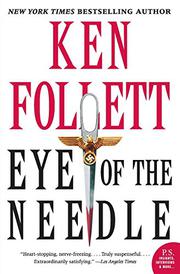 EYE OF THE NEEDLE

Graham Greene he's not. Not even John le Carre or Geoffrey Household. But Ken Follett is here with that particularly British tone of controlled, leisurely tension—you'll feel it on the very first page—that can transform a not-very-original spy plot into a sly gavotte that has you holding your breath as the dancers slowly come together. The familiar D-Day gimmick: only one man can ruin the secrecy of the Normandy landing—a top German undercover agent known as "The Needle" because of his deadly stiletto. But Follett immediately declares his independence from cliches: by luring us over to The Needle's point of view, forcing us to admire his ingenuity (even as he murders a harmless landlady and then his own confederate); by making three-dimensional fellows of the British intelligence men who must catch The Needle before he makes contact with a German submarine; and by dropping in the apparently extraneous story of a young, unhappy man and wife who've been living on an empty North Sea island ever since the husband lost his legs in a honeymoon car accident. Ah, but of course, we know that this couple will be linked to The Needle, and it's with satisfaction that we watch the spy being washed up, half dead, on that island in his attempt to reach a German ship. What then follows—the romance between The Needle and the lovestarved wife, their hideous and unwilling death-duel—is badly marred by explicit sex and explicit sentimentality that, like Follett's occasional anachronistic or heavyhanded fumbles, violate the tone and period feel. But perhaps it's just as well: if Follett's debut were flawless, he'd have nowhere to go. As it is, Eye of the Needle introduces a fresh if not especially distinctive voice in suspense—and is easily the best first novel in the espionage genre since The Day of the Jackal.