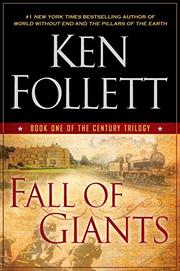 A massive, cat-squashing, multigenerational and multifamilial saga, the first volume of what Follett (World Without End, 2007, etc.) promises as a trilogy devoted to the awful 20th century.

The giants in question, metaphorically, are the great and noble families of old Europe, a generally useless lot with a few notable exceptions. One such worthy, Lord Fitzherbert (try not to think of Bridget Jones here), is a sun around which lesser planets circle, a decent fellow who had been an admiral, British ambassador to the tsar’s court at St. Petersburg, and a government minister. His son, Earl Fitzherbert, is less notable, if fabulously wealthy: He “had done nothing to earn his huge income,” and the presence of the awful Liberals in Parliament, Winston Churchill among them, keeps him from coming into his own as the great foreign secretary he wishes he could be. Into the Fitzherbertian orbit fall the Williamses, Welsh colliers of sweet voice and radical disposition; if Follett’s sprawling story has a center, it is in Billy, who is but 13 as the saga opens and has a great deal of growing up to do. In the outlying reaches of the galaxy is Grigori Peshkov, plotter of the Bolshevik victory and slayer of tsarist officers in a scene straight out of Doctor Zhivago, a confidant of Trotsky’s, who figures in the later pages (“Trotsky took the bad news calmly. Lenin would have thrown a fit”). He’s just one of history’s greats to bow into Follett’s pages: Churchill figures into the story, as does Woodrow Wilson. But so, too, does a full six-page dramatis personae, so that there’s never a dull or unpeopled moment. Throughout it all, Follett keeps a dependable narrative chugging along; if the writing is never exalted, it is never less than workmanlike, though one wonders about anachronisms here and there. (Did Woodrow Wilson, college president and master diplomat, really say “Heck”?)

With an announced million-copy initial printing and a national author tour, this is sure to be one of the season’s inevitable and unavoidable blockbusters—and not undeservedly.