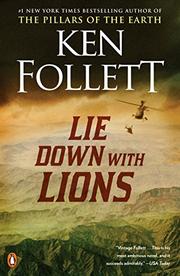 LIE DOWN WITH LIONS

Follett returns once again to his Eye of the Needle triangle-formula—a passionate woman is torn between two lovers who happen to be rival spies—and once again produces only a serviceable, contrived replica of his original blockbuster. This time the sensuous heroine is radical-chic English interpreter Jane Lambert, working in 1981 Paris when she fills in love with American writer Ellis Thaler—only to discover to her horror that he's really a CIA agent! Furious, Jane dumps sexy Ellis (who does truly love her), marrying instead handsome young Dr. Jean-Pierre Debout—who takes her off to Afghanistan, where they'll both provide medical aid to a village of anti-Soviet rebels. Soon after giving birth (native-style) to baby Chantal, however, Jane secretly learns that Jean-Pierre is also an undercover spy. . .for the KGB! In fact, Jean-Pierre's mission—aside from betraying his rebel-comrades on a daily basis—is to set up rebel-leader Masud for KGB assassination. What's poor Jane to do? After all, she still loves J-P—sort of—even if he must be stopped from virtually murdering all their new Afghan friends. Then, of course, old flame Ellis appears: his mission is to arrange an alliance between Masud and the other Afghan-rebel factions—which he manages to do despite attempted sabotage by J-P, who deserts wife and child (temporarily, anyway) for total KGB involvement. So now, inevitably, there's a long, X-rated reunion for disllusioned Jane and lonely Ellis. And, after saving the village from a KGB assault (thanks to a scenic bridge-bombing), Ellis and Jane flee from Afghanistan together, baby in tow—pursued across treacherous mountain trails by KGB helicopters, Afghan back-stabbers, and the increasingly manic, cartoonishly evil Jean-Pierre. As in The Man from St. Petersburg, all the principal characters here must frequently act like idiots in order to keep Follett's synthetic plot-contraption clattering along: Jane's passionate flip-flops are nearly comic; Jean-Pierre's motivation for Communist fanaticism (the persecution of his leftwing father) is never convincing. The narration ranges from solid pulp to Harlequin pap. (The familiarity of Ellis' curly blond hair "tugged at her heartstrings.") Still, despite the creaky plot and pasteboard characterization, Follett does undeniably keep things moving—with medical crises, guerrilla skirmishes, and chase-ordeals galore. And the Afghan-village scenes are agreeably thickened with anthropological details. So this middling effort—less involving than Key to Rebecca, less outlandish than Man from St. Petersburg—is likely to do just as well as its uneven predecessors.