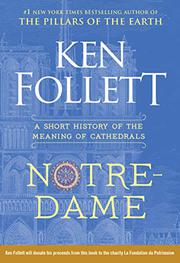 A Short History of the Meaning of Cathedrals

A survey of the storied history of Notre-Dame Cathedral, a victim of a devastating fire in April 2019.

Follett (Edge of Eternity, 2014, etc.) knows a thing or two about medieval cathedrals, having structured his Kingsbridge series around the building of one such architectural wonder. It’s for that reason that when Notre-Dame, the jewel at the heart of Paris, caught fire, the media flocked to the author for commentary. He began informally, he relates here, tweeting to friends and followers that it’s not hard for a gigantic tower of stone to catch fire: “The rafters consist of hundreds of tons of wood, old and very dry. When that burns the roof collapses, then the falling debris destroys the vaulted ceiling, which also falls and destroys the mighty stone pillars that are holding the whole thing up.” Though badly damaged, the cathedral’s pillars held up, and French President Emmanuel Macron has promised that the damage will be repaired within five years. Follett casts some doubt on that optimistic timetable while noting, “it is always unwise to underestimate the French.” In this slender essay, he connects the events of 2019 to the building of Notre-Dame over a century, beginning in 1163. It was, he writes, the equivalent of a space launch today, benefiting whole segments of the society and economy and yielding tremendous technological advances. However, he writes, “when you add up all the pragmatic reasons, they’re not quite enough to explain why we did it.” Indeed, generations of builders would die before the cathedral was finished in 1345, yet they threw themselves into the godly work. The proceeds from this book, which touches on such things as Victor Hugo’s novelistic celebration of Notre-Dame and Charles De Gaulle’s celebrated Te Deum there on the liberation of Paris from Nazi occupation, are being earmarked for the restoration, another space launch–worthy mustering of our better angels.

Fans of Follett and cathedrals alike will enjoy his exploration of the great Parisian edifice—and will want more.