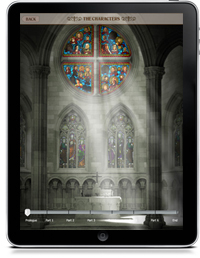 PILLARS OF THE EARTH

Closely following last season’s Starz serial, Pillars seems as much a promotion of that film adaptation as a repurposing of the original novel. The text, of course, is here in all its glory, though the text is plain vanilla, without much fuss; it’s easy to navigate and to bookmark, but with all the visual excitement of a phone directory. The non-book elements are better handled, including too-short snippets from the series (with Ian McShane doing what he does best, namely playing evil) and Gregorian chants and other medieval tunes. The text and visuals are supplemented by biographies of the cast and, more usefully, of charts showing relationships among the principal characters, from the very bad to the very saintly. Still, the makers of the app might have done more to link these good things to the text, which sometimes seems an afterthought.

Says Tom of the cathedral he plans to build, it’s “simple, inexpensive, graceful and perfectly proportioned.” This app really isn’t any of those things, though Follett fans may find it a source of wonder. Now, a mash-up with the text and David Macaulay’s book Cathedral (1973)—there would be a thing to behold.