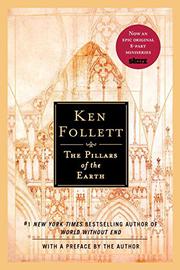 THE PILLARS OF THE EARTH

Here, Follett sets the thrillers aside for a long, steady story about building a cathedral in 12th-century England.

Bloodthirsty or adventure-crazed Follett readers will be frustrated, but anyone who has ever been moved by the splendors of a fine church will sink right into this highly detailed but fast-moving historical work—a novel about the people and skills needed to put up an eye-popping cathedral in the very unsettled days just before the ascension of Henry II. The cathedral is the brainchild of Philip, prior of the monastery at Kingsbridge, and Tom, an itinerant master mason. Philip, shrewd and ambitious but genuinely devout, sees it as a sign of divine agreement when his decrepit old cathedral burns on the night that Tom and his starving family show up seeking shelter. Actually, it's Tom's clever stepson Jack who has stepped in to carry out God's will by secretly torching the cathedral attic, but the effect is the same. Tom gets the commission to start the rebuilding—which is what he has wanted to do more than anything in his life. Meanwhile, however, the work is complicated greatly by local politics. There is a loathsome baron and his family who have usurped the local earldom and allied themselves with the powerful, cynical bishop—who is himself sinfully jealous of Philip's cathedral. There are the dispossessed heirs to earldom, a beautiful girl and her bellicose brother, both sworn to root out the usurpers. And there is the mysterious Ellen, Tom's second wife, who witnessed an ancient treachery that haunts the bishop, the priory, and the vile would-be earl. The great work is set back, and Tom is killed in a raid by the rivals. It falls to young Jack to finish the work. Thriller writing turns out to be pretty good training, since Follett's history moves like a fast freight train. Details are plenty, but they support rather than smother.

It's all quite entertaining and memorable.